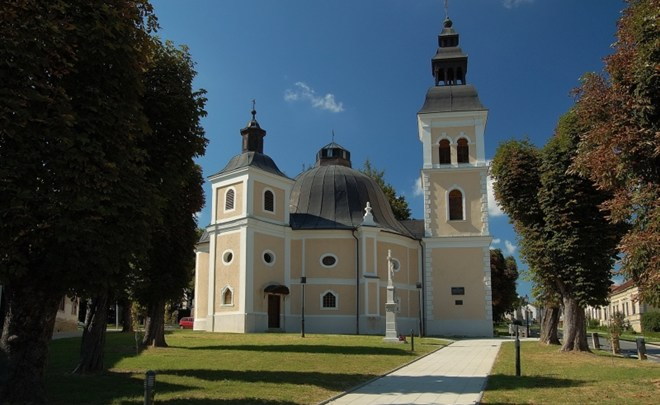 Catholic church of Holy Trinity
When Antun Janković purchased, in the 18th century, the manor Podborje, he took care of the progress of the area and equally took care of the religious life. His name is associated with the building of churches in Pakrac and Badljevina and he invested his own resources in it. Likewise, the construction of the aristocratic chapel in Podborje (today’s Daruvar) is also connected to him and his family. The church was built in 1764 in Greco-Venetian style and it is devoted to the Holy Trinity.
It’s interesting that the year of the building of the Catholic church in Daruvar isn’t precisely determined. Some years are mentioned, like 1730, 1760 and 1770, but the most frequently mentioned year is 1764 which is based on data from the Memorial of the church. In that same Memorial it is written that the church was built on the foundations of a Turkish mosque. It is true that under the northern part of today’s church there are remains of a building that was built before Turks came to this area.
It is built from hard material, with two towers and a dome – on its top is a lantern with openings so that the light can penetrate into the central part. On the seven pillars rests an extremely beautiful choir. At first, the altar was located in the middle and it was the shape of a triangle, which was, after the enlargement, moved to the east and was expanded. The church, at that time, had three entrances – the main entrance and one in each tower. During the renovation of the church’s interior in 1924, the entrance at the north tower was closed. In it’s cavity, which was previously used as God’s tomb, a stone cave of Virgin of Lourdes was built, in which statues of the Virgin Mary and St. Bernadette are placed, which were made by Mr. Antun Richard from Koprivnica.
In 1867 the church got its first small organ which was later donated to the newly built church in Dežanovac. Today’s organ is from 1925 and is the work of the master Venceslav Holub from Požega. In 2008 it was restored in the Art Workshop Hefere and was blessed by Bishop Dr. Antun Škvorčević. The Catholic Church until today survived wars and constant construction. In the 18th century the church was one of the most significant achievements of the baroque period in continental Croatia. Today the church is located in the town centre and represents an extraordinary architectural achievement.

Church of St. Apostle Bartholomew
Initially, in 1746 a wooden chapel of St. Bartholomew was built in Dežanovac, but shortly after the primary school was opened in the village, residents began thinking about building a new church, due to the increased number of local people.
After all the preparatory work, in which local people and local skilled bricklayers were involved, in 1865 the brick church of St. Apostle Bartholomew was built and at the same time blessed. The bell was bought for the church, and a modest altar and a small organ were a gift from Daruvar’s parish. The church, at first, did not express a recognizable style, but in her final appearance there are gothic elements.

Churches in Đulovac
The Catholic church of Holy Spirit was built in 1892 and it is a monument of culture. The church was damaged in 1991 during the War for Independence. Today the church is renovated and extended. Except for the Catholic Church, in Đulovac there is an Adventist church (since 1965) and a Serbian Orthodox church.

Church of the Ascension of the Blessed Virgin Mary
Building of the church started in 1908 and it was finished and blessed on 8thDecember 1909 on the day of Mary’s Immaculate Conception. For liturgical use, a priest from Daruvar, Mijo Etinger, blessed the church. The very idea of building the church appeared twenty years earlier and the carrier of that idea was Ivan Krepelka. The church was restored in the period from 1997 until 2004 and dedicated on 14th August 2005.

Orthodox church of 318 God’s fathers
Today’s parish church in Daruvar, Church of 318 God’s fathers was built in the town center (king Tomislav square). Building of the church in Daruvar began in 1749 and it was finished in 1756. The church is dedicated to the celebration of the Holy Father of the First Ecumenical Council (the Sunday between Ascension Day and Pentecost).
The church is shaped as an elongated rectangle from the outside with an octagonal apse that is supported and reinforced by two buttresses from the foundation to the top of the roof cornice. The aisle of the church is strengthened with five massive arches through which the tie rod of iron passes. Between the arches, the vault is in the form of the so called “Czech hat”. The arches rely on the walls and on the outside they shape pilasters, dividing the building into harmonious fields and between them are simple round-arched windows. On the west side there is a 36 meter high tower with bells under which there is an entrance to the church. At the top of the tower there is a cross made of wrought iron and richly decorated, it is 265 cm tall, gilded in 1894. Opposite the entrance, on higher ground and all the way up to the apex of the arch, there is an iconostasis. It is consisted of 42 icons embedded into the wooden architecture, placed horizontally in five fields. The icons were painted by an unknown artist in 1793. The profiled coronals gable, the rich, the portal and other objects, with their harmony and beauty introduce this church into the community of important monuments of the baroque – classicist architecture in the wider region of Slavonia. Elements of classicism, that the church got when it was refurbished in 1848, have not disturbed its harmony and beauty.
Daruvar’s Orthodox Church has a regular shape, proportional dimensions, whose decorations complement the balanced and harmonious baroque building worthy of everybody’s attention. Since the 28th of April 2005 the church is registered in the Register of cultural goods of Croatia in the list of protected cultural property.

Parish church of the Visitation of the Blessed Virgin Mary
Catholics from Sirač went to Pakrac, and later to Badljevina, for their religious needs. In 1904 the committee for building a chapel was established and the construction began two years later. The church was built in 1907 and during the next year was supplied with all necessary furniture, objects and Eucharistic church attire.
The new church was blessed on 2nd July 1908. Sirač had its’ own church, but it was in the parish Badljevina until the 23rd of September 1945, when the new parish Sirač was opened and declared parish church. After two years the first priest came to the church.